Mallory had a detailed plan for his climb that he discussed with the other people on the expedition.  On June 6, he discussed the details of the climb with expedition photographer John Noel.  Noel was up at the North Col that day and states in his book Through Tibet to Everest that “[w]hen the time came for [Mallory] to make that great climb from which he never returned he discussed his route minutely with me, and told me where to look for him with my telephoto lens on the final pyramid.”

Later, Noel received a note from Mallory which read, “We’ll probably start early to-morrow (8th) in order to have clear weather. It won’t be too early to start looking out for us either crossing the rockband under the pyramid or going up skyline at 8.0 p.m.”  Noel understood that the “pm” really should be “am” and wrote, “His message told me to look out for him next morning at a certain place on the summit ridge which he had previously discussed and arranged with me.”   (p.261).   Noel then descends to Camp III (ABC) and the next morning sets up his telephoto camera to capture the summit pyramid.  Noel has a view of the summit at 8AM but does not see the climbers.  He still has a view until 10AM when clouds block his view.

Later Noel describes the details of Mallory’s route: “Mallory told me himself, when he talked to me of his possible routes up the final pyramid and told me where to watch for him, that he expected to go up the North-East Ridge of the final pyramid, but if he found the gully particularly difficult or if the west wind were particularly  bad he would take the Eastern Ridge, missing the gully by passing across the head of it and gaining better protection from the west wind.  Such a route would bring him along the knife-edge of the Eastern Ridge.  This ridge is corniced by the continual action of the west wind.”  (p. 275).

For the location that Noel is describing, the “North-East Ridge” is NOT the “north east arete” which makes up the “modern route.”   Mallory and Noel were discussing the final assent of the summit pyramid.  At the “pyramid,” there is a split in which two different “ridges” run down from the top of he snow triangle.  One of the “ridges” follows roughly down to the top of the couloir (gully) and makes up the western wall of the couloir.  That ridge is climbed until below the rock band where a gradual traverse out and up onto the north face leads to the summit.  This is the Messner 1980 route and Australian 1984 summit route.   The route up that “ridge” will have you “crossing the rockband under the pyramid” and the route is shown in red. 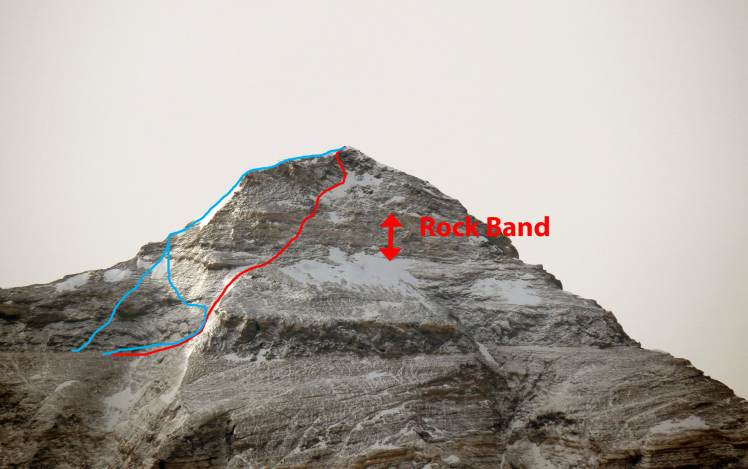 One of the other possibilities that Mallory discussed with Noel was if the couloir became too difficult, he would cross back above the top of the gully and head up to the “Eastern Ridge.”   This route is probably not possible in a reasonable amount of time, but it is the route shown in blue that curves back.  The other possibility was to try to cross over the top of the gully without entering it.   Norton had previously discussed the “zig-zag” route, but in terms of where Noel should be looking for him, the important piece of information was that he gain the “Eastern Ridge”  just above the couloir.  At no time did Mallory tell anyone that he was planning on scaling a 30 foot wall more than a 1000 feet from the couloir.  If he had, any discussion of the “rock band” would be meaningless.  If Mallory’s intent was to climb the Second Step along the modern route, his conversation with Noel and the subsequent note makes no sense.

Turning to the timing of a being at the “skyline” at “8 a.m.,”  Mallory also explained exactly how this was going to happen.  In a letter to his wife dated April 19, 1924, he describes how the final decisions of the climb have been made and notes that he had selected Irvine for his climbing partner because “[h]e will be an extraordinarily stout companion, very capable with the gas and with cooking apparatus.”  In terms of planning the climb, Mallory said, “We shall be starting by moonlight if the morning is calm and should have the mountain climbed if we’re lucky before the wind is dangerous.”   This is what all the modern climbers do — they start at night to avoid the winds.

Based on Norton’s departure time of a 6:40 AM and reaching to couloir at 1 PM, it is reasonable that Mallory planed a 3 AM departure using oxygen with the intent of being about 200 vertical feet above Norton’s high point at approximately 8 AM.

The compass was needed to navigate at night.

Of course, that did not happen, but it explains why there was a note about the compass. A compass generally is not needed to climb Everest, and there are no other references in the expedition reports to navigating by compass.  The reason why it was suddenly so important to Mallory was that he intended to depart at night and needed an azimuth to head out on.  He would have to shoot the azimuth the day prior during the daylight — which is when he noticed it was missing.

He asked Odell to “rescue” the compass because Mallory did not intend to stop at Camp V on the way back down.  Mallory intended to return to Camp VI, and then head down as soon as possible.  Camp V is a short way off the ridge and a climber descending from VI to IV will save a good amount of time by not stopping at V.

Without a compass to navigate Mallory had to come up with another way to navigate or gave up leaving prior to first light.

Mallory notes leading a group of porters up from Base Camp with a start time of 3:15AM, using only moon light.

Mallory had a clear plan to climb the mountain.  He spent days discussing the plan and re-working it with Norton and the other members of the team.  Most of these discussions focused on getting the porters to move the large number of oxygen bottles up to Camp VI,  and Noel want to film the ascent, so he had to know where to point his camera.

Noel had a telescope at base camp and later moved it up to advanced base camp.  There were also a set of field glasses at the North Col.   Mallory spent some time looking at possible routes to the summit and described his possible routes to Noel as either heading up the “rock band” after climbing out of the couloir or bypassing the couloir at its head and then proceeding to the “skyline.”

It was not until later, after Odell saw them climbing a “rock step,” that people thought Mallory might have climbed the Second Step.  However, Mallory’s plans were fairly well outlined, and they did not include climbing a 30 ft rock wall.   If you start with the premise that “Mallory did not climb the Second Step,” everything makes sense.

Mallory intended to start by moonlight to take advantage of the low wind but was delayed by a lack of a compass and likely problems with the oxygen.  Mallory and Irvine headed out at about 6:30 AM — the same time that Norton had managed to leave camp after having trouble with his water.

Mallory and Irvine took the 6 oxygen bottles that they had just begged the Sherpas to carry up to Camp VI and headed out along the route that they had discussed with Noel.  After about 6 hours of climbing they were 200 vertical feet higher than Norton was at the same time on his climb — which is not surprising because they were using oxygen.  They were spotted at this point by Odell who saw them going strong for the summit.   They made the summit but were further delayed by a brief snow storm.  They were descending late when one of them fell while roped together.  They died in the resulting fall. See the route and Irvine’s body location.